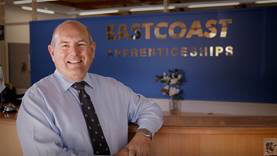 The award recognises East Coast’s Defence Trade Program which supports veterans and their families who are looking for a trade career.

Alan says veterans have an important contribution to make once they leave the service.

“We've got people here who have served the nation, who have made in many cases significant sacrifices, and it behoves us not to give them a hand out but certainly a hand up in that transition out of service life. It would be silly on everyone's part not to recognise that veterans have a continuing contribution to make.”

East Coast Apprenticeships is one of Queensland’s largest group training organisations. The Defence Trade Program offers tailored training and support to arm veterans with the necessary confidence and skills to enter the apprentice system and gain paid employment.